What would it mean to blog on the Semantic Web?

This paper discusses the advantages of the semantic web for integrating distributed conversations, and provides a concrete example of a prototype system based on Haystack. The system allows creation of a semantic blog. Besides publishing, it can be used for aggregation and browsing, presenting usable and useful interfaces to the reader. 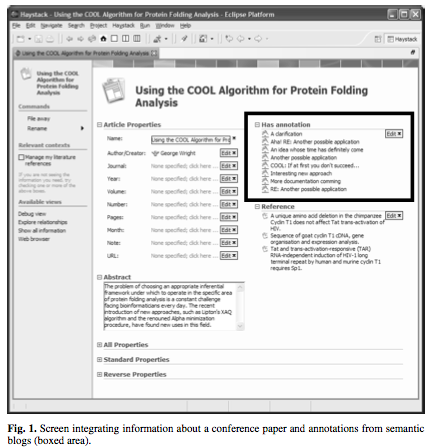 The prototype system can be used to publish blog posts, which are enhanced by metadata tags:

Thus, "the semantics surrounding the reason for a blog entry's creation can be captured immediately". They provide a fictious scenario (in section 6) in which a reader "can tell at a glance that two of the initial blog entries are commendations while the other is a criticism". He can also drag a bookmark into "the In regards to field, making his blog entry an annotation for that argument".

Bloggers already are providing semantics, they argue, so blogging software just needs to capture (and display) it. They transform RSS feeds (RSS .92/2.0) from existing blogs into RDF Site Summary 1.0. They also mention an extended version of RSS 1.0 which enables publishing deeper metadata (such as ratings and calendar information)--potentially as the entire content of a feed. This uses existing ontologies created by the Haystack project, e.g. for collections and messages.

Semantics can make reply-to chains more explicit and avoid the need for protocols such as TrackBack (by which blog servers keep in sync with each other). Interfaces which aggregate blogs and make the relationships between them more explicit can also help, ultimately overcoming the need for centralized mechanisms such as newsgroups.

Blogs could also share categories (thus perhaps disambiguating them, in service of semantic search). Aggregations could display visuals (e.g. thumbs up/thumbs down for commendation/complaint) and integrate blog content with other info. 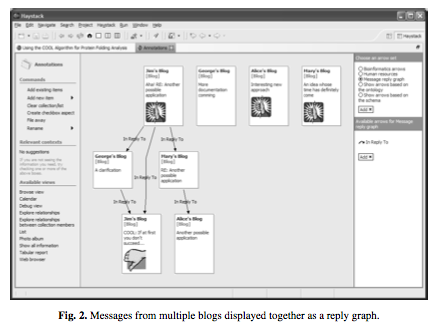 The paper also gives a structural analysis of blogging; they decide that blogging consists of three "distinct, key concepts":

They also describe the "hidden semantics" in blogs, discussing how blogs (I think they must mean blog posts!) can be

This paper is early work in the field of the [http://en.wikipedia.org/wiki/Social_Semantic_Web