Typology of tasks is an section in McGrath's (1984) influential Groups: Interaction and performance. The chapter offers an influential multi-dimensional ontology through which tasks can be broken down or categorized. Much of the rest of the book walks through research on groups using the framework introduced in the typology.

The typology can be summarized in the following "circumplex." 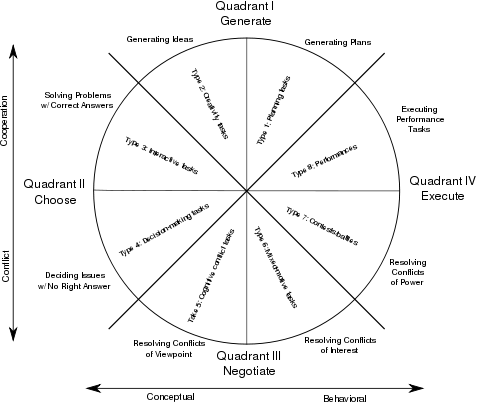 The typology breaks tasks down into four major performance goals: generation, choosing, negotiation, and execution. It places each on two axes (on between conflict and cooperation) and one between conceptual and behavioral outcomes. Each quadrant is then broken down into two major types of tasks and each sub-area is associated explicitly with a specific outcome.

McGrath's book has been cited more than 2,300 times since it was published 16 years ago. Many of these citations are to his influential typology, distilled into the circumplex, which continues to be an influential way to approach the