This paper imagines augmenting scientific communication with "a complementary infrastructure that is “native” to the emerging semantic, collaborative web". It then discusses the Scholarly Ontologies project.

Digital libraries do not answer fundamental questions such as

These questions "require semantic annotation at a different level from that addressed by conventional metadata or ontologically based markup in semantic web research, which seek to iron out inconsistency, ambiguity, and incompleteness in the way resources are characterized". In particular, disagreement is important, because this is what marks something as research.

Next they describe the discourse ontology, and its theoretical framing in Cognitive Coherence Relations theory (see e.g. Modelling discourse in contested domains: A semiotic and cognitive framework, or the fundamental linguistics papers Coherence relations in a cognitive theory of discourse representation and Towards a taxonomy of coherence relations).

This provides details about the first ClaiMaker prototype, a ClaiMaker Word plug-in, and the pen-and-paper sketching that helped them understand what was missing. The need for a "big picture" led to ClaiMapper, which allows users to draw links between nodes, and to copy nodes by reference.

One problem with ClaimMapper is that users don't always know how to structure their maps. ClaimSpotter deals with this, in three ways:

draws from research in hypertext, HCI, CSCW, and computational linguistics. 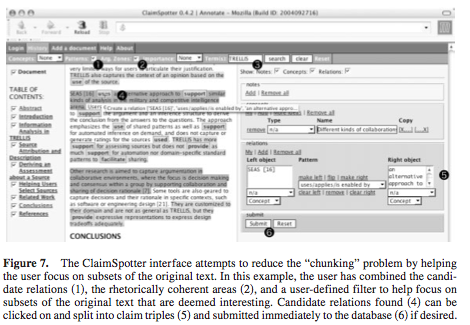 Based on user comments, they "believe that the design of interfaces for creating claim networks, and possibly argument models in general, may influence the kinds and quality of models produced." They argue that good interfaces can help users to "push the balance toward formality".

ClaimFinder and Example Use Cases

ClaimFinder generates visualizations of Concepts/Sets/Claims. Various screenshots are presented, along with two use cases, providing discovery services in a Web browser, with a Java applet or alternately a stand-alone Java application.

They provide examples for two use cases:

These motivate what they call "discourse taxonomy" (the annotation process they have been describing).