This paper describes CATO, a computer-based learning environment for law students learning to make arguments with cases. CATO was evaluated during a 3-week trial as part of the second-semester legal writing course for selected first year students at the University of Pittsburgh School of Law.

CATO instruction led to statistically significant improvement of basic skills, comparable to the control group, who were taught in small groups by a highly experienced instructor. However, CATO instruction did not prepare students as well for a legal memo writing assignment.

Earlier work on argument moves was done by the author for HYPO (see Modeling legal argument: Reasoning with cases and hypotheticals).

The Factor Hierarchy represents domain knowledge which is used to represent cases, organize multi-case arguments by issues, and make arguments about the significance of distinctions.

As in Rationale and Carneades, both positive and negative links are made between nodes, where 'positive' means that the argument *supports* the side making the graph. CATO's Factor Hierarchy also distinguishes between strong and weak links and uses the notions "Issue", "Abstract Factor", and "Base-Level Factor", as shown in Figure 4 below. Abstract factors are topical and high-level, and relate to behavioral norms. "Each abstract factor stands for two opposing conclusions, one favouring plaintiff, one favouring defendant." Base-level factors provide more detailed arguments.

CATO's algorithm uses case-based reasoning, and is described in How different is different? Arguing about the significance of similarities and differences. 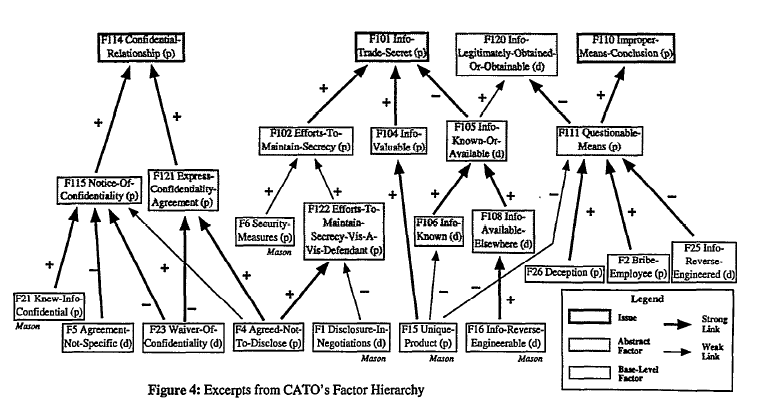 Further detail is given about the arguments CATO generates and how CATO was used for teaching. The skill of distinguishing is treated in special detail. Section 6 covers the empirical evaluation of CATO. Amusingly, the program's answers were graded in a blind test; it was one of the best in the class on the argument skills test, but below average in memo writing. Feedback from the legal writing instructor provides some directions for improving CATO; the authors note that CATO's model will be needed to improve on memo writing.

One missing consideration is the process by which CATO's Factor Hierarchy was generated.

CATO generates arguments based on issues and case law. It can be used to teach legal argumentation of cases law and may inspire argument generation in other domains.

CATO also provides evidence of the usefulness of indexing by argument: "cases are represented and indexed by the factors that guide their use in arguments," simplifying students' work, compared to using a full-text retrieval system.